“It was revealed that the two perpetrators wanted to try to enter the bank. But it did not work,” said Head of Criminal Investigation Unit of Surabaya Police, AKBP Oki Ahadian when released at the Surabaya Police Headquarters, Monday (8/3/2021)

The Head of the Criminal Investigation Unit of the Surabaya Police explained that when the perpetrator wanted to put his dollar into a bank, the suspicious bank officer finally conducted an investigation. And it turned out to be true, the dollar bill was fake, then the officers contacted the police.

“This money wants to be put into the bank, from the suspect’s confession, he wants to be exchanged for securities, bonds or something,” said the Head of the Surabaya Police Reskrim.

Meanwhile Wakasat Reskrim Surabaya Police Commissioner Abumka Yudha said the two perpetrators initially brought fake US dollars in 100 dollars from Bali at the orders of another perpetrator with the initials AA in Surabaya. They carry fake dollars overland.

Read to : Best Devotion, The government and the local community are doing community service in Intan Jaya 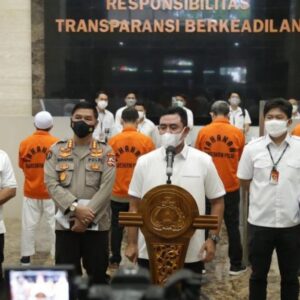